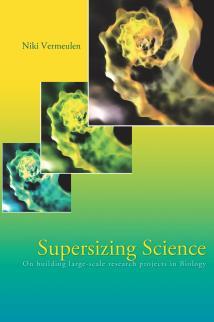 In recent years there has been a clear rise in scientific collaboration, as well as in studies on the subject. While most scholars examine disciplines traditionally known to be collaborative, such as physics and space research, this book focuses on biology. It investigates the growing collaboration in the life sciences, or the emergence of what is called 'big biology'. While the Human Genome Project is often presented as the first large-scale research project in biology, cooperation in the life sciences has a longer history. A comparison between centralised 'big physics' and 'big biology' reveals how the latter has a networked structure, which evolved in interaction with the integration of information and communication technologies. By concentrating on the construction of these networks, three contemporary large-scale research collaborations are analysed: the Census of Marine Life that aims to make an inventory of life in the oceans, the Silicon Cell initiative that wants to design a replica of a cell in a computer, and the VIRGO consortium, which investigates host-virus interaction to develop a new therapy against influenza. This book demonstrates how the process of making science bigger, or the 'supersizing of science', transforms the ways in which science is organised while it also changes the work of scientists involved. As such, this has both scholarly and professional implications for the next generation of scientists.