The Complete Guide to Robert's Rules of Order Made Easy: Everything You Need to Know Explained Simply 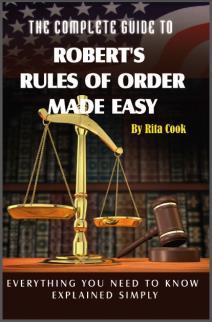 Robert's Rules of Order have been around since 1876, when Henry Martyn Robert published the first edition of his book, which was then known as the Pocket Manual of Rules of Order for Deliberative Assemblies. The book based its outline on the House of Representatives' meeting procedures and adapted these methods for use in society as a whole. Since these rules debuted, they have become the most commonly adopted parliamentary method in the United States, with approximately 95 percent of all clubs, organizations, and governments practicing them. When the copyrights of the original editions expired, many other Robert's Rules of Order began to surface. Today, many of these books are the same - with one apparent problem: a lack of focus on current trends, specifically the Internet. However, The Complete Guide to Robert's Rules of Order Made Easy emphasizes this fact and stresses how society has changed due to the advent of the Internet. Clubs, organizations, and societies need to know how to meet and communicate online, and this book provides the answer. In this book you will learn about technology, conducting meetings online, communicating online, teleconferences, Web conferences, and Web seminars. You will also learn the proper ways to address and send e-mails, as well as how to communicate using instant messenger software. The Internet has transformed the meeting space, and you need to incorporate these changes into your meetings. Additionally, you will learn about all the more traditional rules, including such things as quorum, abstention votes, votes of no confidence, friendly amendments, proxy votes, executive sessions, points of privilege, parliamentary inquiries, and debates. You will also learn how you can adopt Robert's Rules of Order, how to qualify as a legal meeting, how to follow the standard order of business, how to handle a motion, and how to nominate and elect officers. Also included is a discussion of the various motions, including privileged, incidental, subsidiary, main, and unclassified, as well as the basic by-laws and the required paperwork, such as minutes, treasurer's reports, and committee reports. The Complete Guide to Robert's Rules of Order Made Easy will serve as your guide to conducting orderly and fair meetings in the 21st century. The rules for using the Internet as a meeting and communication space are clearly defined, easy to understand, and simple to apply.