The Transition from Technocracy to Aristocracy in Japan, 1955-2003 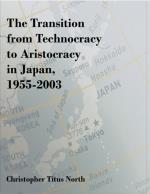 The core issue underlying the bulk of scholarly research into the Japanese political economy is the relationship between the bureaucracy and the politicians. My study investigates whether there has been a relative decline in bureaucratic influence and whether politicians are displaying more independence in the policy making process than they did during previous decades. My main hypothesis is that the loss of bureaucratic influence has largely been a function of the declining position of former bureaucrats within the ruling Liberal Democrat Party (LDP), and that it has largely been politicians who were able to enter the Diet at a young age due to hereditary recruitment who have gained influence. Their ability to build up seniority has placed them at an advantage in promotion to key party and government posts due to the adoption of a seniority system of selecting cabinet ministers and party leaders. . I use probit and logit analysis of LDP cabinet and Diet members (1955-2003) to demonstrate the decline of former bureaucrats within the LDP in terms of their overall numbers and their occupancy of key posts. I use cross case study analysis of the work of three major blue-ribbon administrative reform panels (the Provisional Administrative Reform Commission established in 1962, the Second Provisional Administrative Reform Commission established in 1981, and the Administrative Reform Council established in 1996) to demonstrate how the lack of former bureaucrats within the LDP left the Ministry of Finance vulnerable to reform that stripped it of authority and altered its traditional policy preferences. My case studies analysis shows that following the founding of the LDP in 1955, former bureaucrats in the party supported delegating substantial authority to the bureaucracy and resisted attempts to curtail bureaucratic influence, acting as conduits for bureaucratic influence in the LDP. However, over time as former bureaucrats lost their pre eminent position within the LDP, attempts to reduce bureaucratic influence were successful. I conclude that the reforms implemented on the recommendations of the Administrative Reform Council fundamentally changed Japanese financial administration and altered financial policy in a way that was a major departure from traditional bureaucratic preferences.