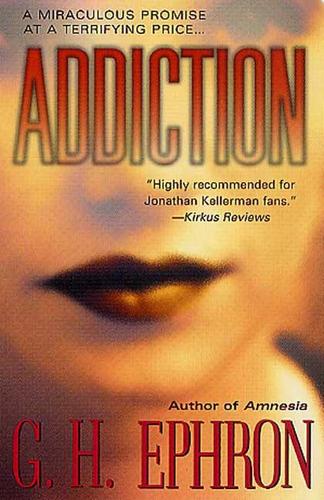 Amnesia, G.H. Ephron's acclaimed debut, introduced forensic neuropsychologist and expert defense witness Dr. Peter Zak. Returning in Addiction, Peter is back in the thick of things at the Pearce Psychiatric Center, coping with patients as well as everyday average administrative nightmares at the hospital, like budgetary concerns, construction, and colleagues' drug trials. And then the worst nightmare of all-the murder of a colleague.

Such an event, if it weren't devastating enough, rekindles Peter's memories of the murder of his wife, which left Peter emotionally shattered and isolated; he's only recently begun to emerge. But he can't retreat this time; he must use his expertise to help reconstruct this baffling and intensely personal killing.

Peter discovers his friend and former lover, Pearce psychiatrist Channing Temple, dead from a gunshot wound on hospital grounds. Her 16-year-old daughter Olivia is standing over the body, holding a gun. Did Olivia, who has been abusing Ritalin and other drugs, kill her mother? Peter thinks not, but she is quickly arraigned for murder, and he has only two weeks to find the killer before Olivia is sent to prison. In this tense and compelling second installment in a highly lauded series, the talented writing team known as G.H. Ephron tackles the dangers and misconceptions surrounding addiction...and the chaos of murder.