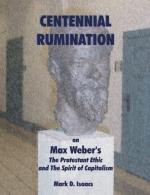 "In 1904-1905 Max Weber published the sociological classic The Protestant Ethic and the Spirit of Capitalism. In this book Weber argues that religion, specifically “ascetic Protestantism” provided the essential social and cultural infrastructure that led to modern capitalism. Weber’s suggests that Protestantism has “an affinity for capitalism.Indeed, something within Protestantism—by accident or design—creates the necessary preconditions that lead to the flowering of a just, free, and prosperous society. At the same time, Weber wonders if the economic backwardness of certain societies and regions of the world are somehow related to their religious affiliation. Weber’s century old thesis challenges the erroneous core assumptions of many secular humanists, postmoderns, Roman Catholic traditionalists, and Islamists. In view of the threat of the War on Terror, and in the face of the inadequate response of secularist and post-modern intellectuals, it is vital that we understand and appreciate the profound paradigm shift that occurred during the sixteenth and seventeenth century that led to the unfolding of modern capitalism. Despite a plethora of critics Max Weber’s one-hundred year old thesis still stands."