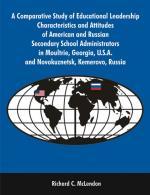 "Since 1991, the Russian Federation has dealt with extreme political, economic, and social change. On the national level and at the local level, opponents of democratic reforms have retained their control of many important offices. This has resulted in contradictions and confusion in regards to national and local laws and policies, and has had little impact on local educational policies and practices. Added to this general crisis of Russian education reform is the inability of so-called Western education experts to comprehend the complexities and cultural differences of Russia and its education system when compared to the west. There have been several studies of business management ideology since the breakup of the Soviet Union, but American and Russian comparative educational leadership studies are not to be found. Inquiry has produced no empirical studies in Russia, and only two American empirical studies that have direct bearing on this research. Also, studies by the Organization for Economic Cooperation and Development, the United Nations Educational, Scientific and Cultural Organization, and the World Bank have looked at the total educational system with little or no specific study of educational administration.

The purpose of this descriptive study is to obtain an impression of how secondary school educators in the Russian Federation and the United States perceive their job responsibilities and organizational structure. This research study is of interest in terms of realizing the similarities and dissimilarities of Russian and American educational leadership. The survey instrument, based on Hofstede’s Values Survey Module 1994, was distributed among secondary school administrators and faculty at Colquitt County High School in Moultrie, Georgia and their professional counterparts at Secondary Comprehensive School No. 56 in Novokuznetsk, Russia. The collected data may help in understanding organizational dynamics in general and allow for the judgment of cultural contexts on Russian and American educational leadership. This research study makes broad use of materials drawn from Russian and Western publications, government documentations, and other scholarly analyses."