Magnetic Fields Near and Far: Galactic and Extragalactic Single-Dish Radio Observations of the Zeeman Effect 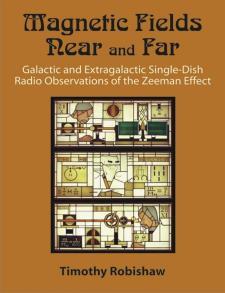 According to astrophysical theory, magnetic fields should play an important role in the structure and dynamics of the interstellar medium. While astronomical observations confirm this directly, the observational record is sparse. This is because magnetic fields can only be measured via polarimetric methods, and most of these methods can only provide an indirect inference of the magnetic field strength. The Zeeman effect, however, is the only method by which in situ measurements of astrophysical magnetic fields can be made. The spectral signature of Zeeman splitting is imprinted in the circular polarization spectrum of radiation received from an astronomical source. In order to make a reliable detection at radio frequencies, one must employ careful calibrations and account for instrumental effects. We begin this dissertation by covering the fundamentals of radio spectropolarimetry. We then offer historical details regarding the Zeeman effect and its use in single-dish radio observations. We present an outline of how one accurately measures the Zeeman effect using large single-dish radio telescopes. We follow this with results from an assessment of the polarization properties of the 100 m Green Bank Telescope (GBT). We then present magnetic field detections made via the Zeeman effect from the Galactic scale to cosmological distances. We begin with GBT observations of 21 cm emission toward the Taurus Molecular Cloud (TMC) complex. Recent observations have suggested that fields stronger than 20 microgauss are located at the distance of the TMC. Our Zeeman observations rule out fields of this strength, but do show a clear +5 microgauss detection from HI emission at the velocity of the TMC. More surprisingly, we have discovered multiple detections of a line-of-sight magnetic field of strength roughly +40 microgauss in a filament near -50 km/s. We then present a windfall of detections of milligauss-strength magnetic fields in starburst galaxies. Detected by means of Zeeman splitting of 1667 MHz hydroxyl megamaser emission, these Arecibo and GBT results represent the first extragalactic Zeeman measurements to probe the field inside an external galaxy. Finally, we climb the cosmological distance ladder, and present a dramatic GBT detection of a magnetic field in a damped Lyman-alpha absorber at a redshift of 0.692. We discuss possible scenarios for the creation of an 84 microgauss field at a look-back time of 6.4 Gyr.