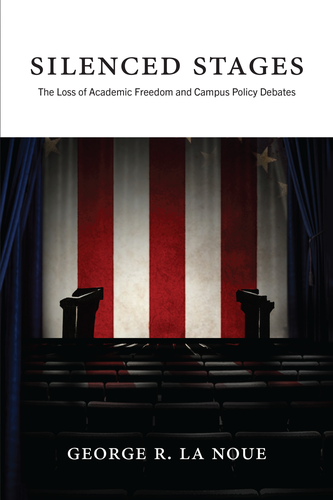 Recently, many American higher education institutions have endured politically motivated disturbances undermining academic freedom. Unlike the wave of disruptions under the expanded free speech banner in the Sixties, these new protests have often sought to limit the speech of invited speakers, campus spokespersons, and the media with whom they disagreed. In response, many prominent persons, including former President Obama, university leaders, and faculty senates, have sought to restore the primacy of open dialogue as an academic ideal.

The barking dog of censorship usually creates attention. This book discusses incidents that created national publicity at Amherst, Brown, City University of New York, Evergreen, Lewis and Clark, Michigan, Middlebury, New York University, Reed, Seattle, Yale, UC Berkeley, University of Pennsylvania, University of Washington, Vanderbilt, and Wesleyan. But, if that guard dog just silently patrols the fences of acceptable campus discourse, nothing may be heard in the vacuum created. Many speakers will not be invited and many public policy issues will be thought too controversial for open discussion. Even tenured faculty may avoid expressing ideas that will upset their colleagues or campus activists. For free speech, the problem may be more often what is omitted from campus discussions, the silenced stages, than overt suppression.

This book reports on original research about the topics and participants in on-campus policy debates or forums where divergent viewpoints were presented regarding 24 national policy areas. Accessing campus calendars for 2014 and 2015 in a stratified national sample of 97 universities and colleges and 28 law schools enrolling 991,802 students annually, the results show a paucity of such events, except at very elite wealthy institutions or law schools. For most students in American higher education, the opportunity to hear on-campus debates about important public policy issues does not exist. Free speech for controversial speakers dominates the press coverage, but the more important story of the absence of debate and divergent opinion is missed.