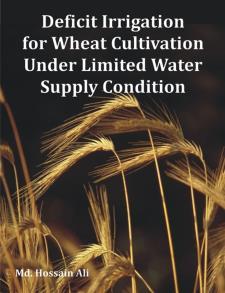 Vertical and horizontal expansion of irrigated agriculture to feed the increasing population has contributed to excessive groundwater withdrawal and affected the availability of water in terms of both quality and quantity. To sustain agricultural growth, strategic measures should be adopted to reduce water consumption while minimizing adverse effect on yield. The effect of deficit irrigation on wheat yield was studied in three consecutive years (2002-03 to 2004-05) in field and pot. Ten irrigation treatments were imposed in a randomized complete block (RCB) design covering full deficit, no deficit at all, single deficit at different stages, and alternate deficits. Water deficit was created by withholding irrigation at different growth stages. The results indicate that deficit irrigation strategies affected all aspects of plant growth (leaf area index, chlorophyll content, root growth, nutrient uptake, plant height) adversely. Yield attributes were affected by deficit irrigation treatments although they are not statistically significant in all cases. Differences in grain and straw yield among the partial- and no-deficit treatments were small, and statistically insignificant in most cases. When compared within single-deficit treatments, the grain yield reduction was in the order to water deficit at phases: CRI> maximum tillering > booting - heading >flowering- soft dough. The crop coefficient (kc) under different ET0 methods for early, crop development, middle, and late period ranged from 0.54 to 0.96, 0.95 to 1.36, 1.2 to 1.62, and 0.68 to 1.05, respectively. On average, yield response factor (ky) for early, maximum tillering, booting-heading, and flowering-soft dough stages was 0.27, 0.21, 0.25, and 0.17, respectively. The sensitivity index (?i, of Jensen model) for early, vegetative, booting-heading, and flowering-soft dough phases was 0.35, 0.22, 0.31, and 0.14, respectively. From the evaluation of yield, irrigation amount, irrigation water productivity, relative water savings, relative yield reduction, and maximum profit under limited water resource condition, it can be concluded that when limited quantities of water is available, preference should be given to irrigate first at CRI (if one irrigation is available), then at CRI and booting-heading (if two irrigations are available), and next at CRI, maximum tillering and booting-heading (if three irrigations are available) stages of growth.