How to Fix Them without Spending More Money (Maybe Less), Second Edition 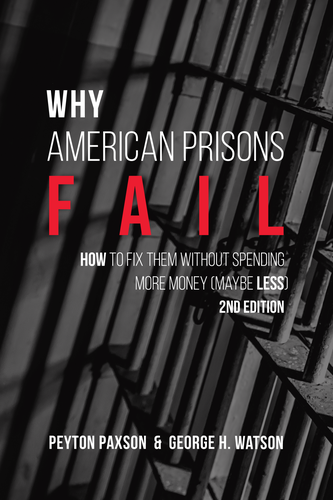 In Why American Prisons Fail: How to Fix Them without Spending More Money (Maybe Less), two former law school classmates, Peyton Paxson, a criminal justice professor, and George H. Watson, a past federal inmate and former attorney, address the issues currently facing our corrections system. They begin by describing how events in the late twentieth century caused the U.S. to have the highest incarceration rate in the world today. They go on to discuss how Watson found himself in prison and his observations of how prisons fail to do their jobto rehabilitate prisoners and prepare them for reintegration back into society.

The book provides brief surveys of the history of criminological theory and American prisons and compares U.S. penology with that of other Western democracies. The authors also examine the political and economic factors that drive todays mass incarceration phenomenon. They conclude with a discussion of existing best practices and proposed reforms to move away from expensive and unsuccessful mass incarceration toward a more effective system. Why American Prisons Fail is particularly timely, as there are rising bipartisan calls in Washington and among the states to adopt a different response to crime.

This second edition updates the first, which was written during the end of the Obama administration. The authors compare and contrast the policies of that administration and the current Trump administration, while maintaining the bipartisan nature of the discussion.