What IS in a Name?

Taxation and Regulation across Constitutional Domains 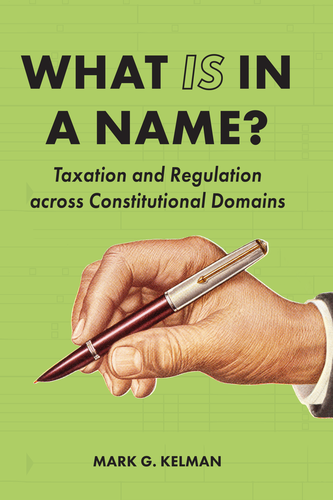 What IS in a Name? argues that relying on commonsense distinctions between taxes and regulations is ultimately not helpful when examining the practice of minimally scrutinizing government exercises of the taxing but not the regulatory power. The book further argues, against the weight of much conventional legal wisdom, that, when one looks more carefully at the concrete goals we should be trying to achieve in limiting government power, we should conclude that existing free exercise law is both disingenuous in dismissing claims to exemption from taxes used to support practices the religiously observant find objectionable and far too friendly to religious claims to immunity from regulations that merely require the expenditure of fungible resources; that the ways in which we analyze explicit taxes under the Equal Protection clause and regulations under the Takings clause should be brought into greater harmony, ensuring in each case that there is a sensible reason that one citizen bears more of the burden of meeting public aims than another; and that the Congressional power to impose implicit regulatory taxes should be fundamentally coextensive with its power to impose explicit ones.