The Applicable Law to International Commercial Contracts and the Status of Lex Mercatoria: With a Special Emphasis on Choice of Law Rules in the European Community 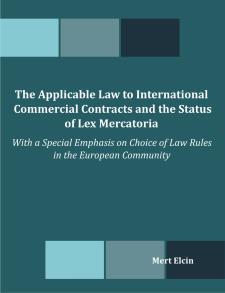 International commercial contracts in the context of increasing globalization of the national markets have posed some of the most difficult questions of the legal theory as developed since the emergence of nation states; those are, whether it is possible or desirable to allow international commercial contracts to be governed by the law merchant or, in its medieval name, lex mercatoria, a body of rules which has not been derived from the will of sovereign states, but mainly from transnational trade usages and practices, and to what extent those rules should govern transnational transactions. The traditional approach of legal positivism to the questions maintains that law governing contracts containing a foreign element should be a national law which will be determined according to choice of law rules. However, the particularities of cross border trade yield unsatisfactory results when the rules essentially designed for the settlement of domestic disputes or national laws pertaining to international economic relations, but developed under the influence of a certain legal tradition, are tried to be applied. New solutions are needed to overcome the special problems of international trade between merchants from different legal systems. In that regard, while the international commercial arbitration which has been freed from the constraints of the domestic laws is an important step, the courts generally applying the principle of party autonomy which allows parties to designate the law that will apply to their transactions have proved insufficient due to the positivistic influence on the conflict of laws rules of most countries which has limited parties' choice of law to the national substantive laws. The problems created by those inconsistencies and divergences have been felt more strongly in the European Community which constitutes an internal market by integrating the national markets of Member States into a single one. The present paper is an attempt to search for answers to those questions with a special emphasis on the situation in the European Community on the basis of the idea that law as a servant of social need must take account of the far reaching and dramatic socio-economic changes.