Economic Sanctions as an Instrument of U.S. Foreign Policy: The Case of the U.S. Embargo against Cuba 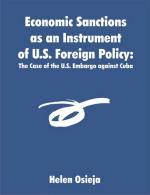 "Economic sanctions have been used as an instrument of American foreign policy ever since the Taft administration adopted the Dollar Diplomacy. This dissertation analyzes the trade Embargo the United States imposed upon Cuba after the Revolution from different perspectives: from the political, considering the main guidelines of American foreign policy toward Latin America, especially during the Cold War, and from the juridical, considering different perspectives of customary international law.

Since the embargo was imposed only after American property had been expropriated without compensation, the dissertation analyzes the legality of expropriation, seen from the perspective of both capital-importing and capital-exporting countries, and the legality of economic sanctions as a legitimate peaceful reprisal. Due to the fact that the American embargo against Cuba is quasi-total, that is, consists of a number of different economic sanctions, it is the aim of this dissertation to analyze each of these, and finally, to assess the effectiveness of economic sanctions as an instrument of foreign policy.

Many books and articles have been written about this very controversial embargo, almost as old as the Cuban Revolution itself. For the Cubans, it constitutes and “economic blockade”, and a violation of Cuba’s right to free trade; for the Americans, it is a reprisal for the confiscation of American property. Nonetheless, since the embargo, as stated above, is not a sanction itself but a number of different economic sanctions, it is the aim of this dissertation to analyze each of the sanctions that comprise the embargo and its legality, according to customary international law.

Another aim of this dissertation is to prove why the American embargo against Cuba has only enhanced Castro’s power and further centralized it. A brief chapter about the economic sanctions the United States imposed upon Chile under President Salvador Allende and the fall of his regime serves to compare the two cases with some similarities where sanctions were applied- in the first without success and in the second with success. Finally, the dissertation aims to prove that a lifting of the American embargo against Cuba is highly unlikely unless there is a change of regime in that nation of the Caribbean."