Bridging the Gap: Elusive Explosions in the Local Universe 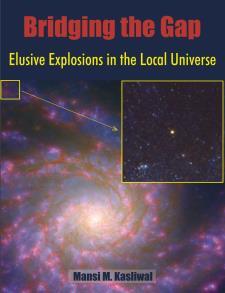 For centuries, we have known that our dynamic universe is adorned by cosmic fireworks: energetic and ephemeral beacons of light from a single star that are a million (nova) to a billion (supernova) times brighter than our sun. However, it had been an age-old conundrum that the brightest nova is approximately 1000 times fainter than the faintest supernova; why should nature leave such a wide "gap"? In search of an answer, I undertook three systematic surveys for my thesis. Since I was looking for transients fainter, faster and rarer than supernovae, I focused my search on galaxies in the local universe. We now have convincing evidence of multiple, distinct populations of rare transients bridging this "gap". Perhaps, we are witnessing new stellar physics- shell detonations in ultra-compact white dwarf binaries, electron-capture supernovae, white dwarfs collapsing into neutron stars and birth of black-holes. A small number of intensively followed-up discoveries of elusive transients sets the stage for population studies with the upcoming "Large Synoptic Survey Telescope". This effort works towards building a complete inventory of transients in the local universe (d<200 Mpc). It better prepares us for the search for potential electromagnetic counterparts to events in the emerging fields of gravitational wave, neutrino and ultra high energy cosmic ray astronomy as these experiments are also limited to the local universe.