The Study of a Secret Society: Resistance to Open Discussion of Suicide in the United States Coast Guard 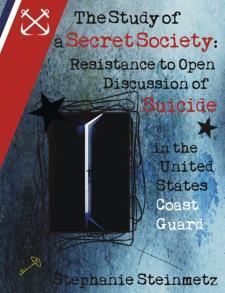 This project began as an investigation into the high rate of suicide among members of the Coast Guard in comparison to other branches of the U.S. Armed Forces. The course of research revealed Coast Guard officials' chronic reluctance to disclose information about suicide. Therefore, the new focus of research became a comparative investigation of the Coast Guard's resistance to discussing suicide within the organization. The study was conducted through interviews with a sample of Coast Guard and other military members as well as through discussion boards on the Internet. Questions centered on military life experience, stress, depression and suicide. The data suggest that members of the Coast Guard 1) initially appeared excited to participate in the study, however, when asked to discuss or disclose suicide-related information about the Coast Guard, they displayed marked signs of reluctance about their participation; 2) Coast Guard members emphasized the idea of the Coast Guard being a family; 3) Coast Guard members presented as the most conversational when compared with the other military branches; 4) the Coast Guard has a humanitarian mission as opposed to the other four combat-oriented services; 5) Coast Guard's image and perception among members of the Armed Forces is unique and somewhat set apart from the other, larger and more combat-oriented services; 6) the Coast Guard is perceived to be the toughest service to get promoted in, and it is seen as the most competitive when compared to all other military branches; 7) there is a differential suicide rate between the Coast Guard and the other military branches during both war and peace times. The findings are analyzed using Töennies' concept of Gemeinschaft versus Gesellschaft, Horney's theory of neurosis, Argyris' theory of organizational defensive routines, as well as Menninger's theory of suicide.