Neutron Stars and NuSTAR: A Systematic Survey of Neutron Star Masses in High Mass X-ray Binaries and Characterization of CdZnTe Detectors for NuSTAR 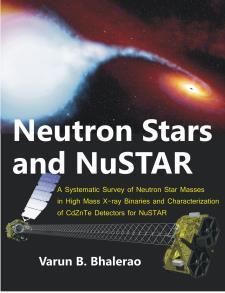 This book centers around the study of neutron stars, especially those in massive binary systems. To this end, it has two distinct components: the observational study of neutron stars in massive binaries with a goal of measuring neutron star masses and participation in NuSTAR, the first imaging hard X-ray mission, one that is extremely well suited to the study of massive binaries and compact objects in our Galaxy. The Nuclear Spectroscopic Telescope Array (NuSTAR) is a NASA Small Explorer mission that will carry the first focusing high energy X-ray telescope to orbit. NuSTAR has an order-of-magnitude better angular resolution and has two orders of magnitude higher sensitivity than any currently orbiting hard X- ray telescope. I worked to develop, calibrate, and test CdZnTe detectors for NuSTAR. I describe the CdZnTe detectors in comprehensive detail here-from readout procedures to data analysis. Detailed calibration of detectors is necessary for analyzing astrophysical source data obtained by the NuSTAR. I discuss the design and implementation of an automated setup for calibrating flight detectors, followed by calibration procedures and results. Neutron stars are an excellent probe of fundamental physics. The maximum mass of a neutron star can put stringent constraints on the equation of state of matter at extreme pressures and densities. From an astrophysical perspective, there are several open questions in our understanding of neutron stars. What are the birth masses of neutron stars? How do they change in binary evolution? Are there multiple mechanisms for the formation of neutron stars? Measuring masses of neutron stars helps answer these questions. Neutron stars in high-mass X-ray binaries have masses close to their birth mass, providing an opportunity to disentangle the role of "nature" and "nurture" in the observed mass distributions. In 2006, masses had been measured for only six such objects, but this small sample showed the greatest diversity in masses among all classes of neutron star binaries. Intrigued by this diversity-which points to diverse birth masses-we undertook a systematic survey to measure the masses of neutron stars in nine high-mass X-ray binaries. In this book, I present results from this ongoing project.