Quantificational Modification: The Semantics of Totality and Proportionality 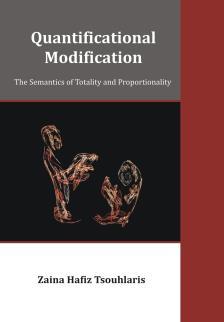 The thesis explores the syntactic and semantic dimensions of four linguistic elements that appear in Modern Greek arguably as quantifiers and modifiers, i.e., in the form of Quantificational Modifiers (QMods) olos 'all, whole, overall' and its extension olikos 'total', merikos 'some, a few, partial', ligos 'some, few, little, insignificant' and polis 'many, great, considerable'. Such QMods are analyzed as 'measure' quantifiers of scalar semantics that appear in a syntactic position common to adjectival modifiers. The thesis explores specific sets of reading and their interpretations. Such a phenomenon is common to Modern Greek, English, French and Arabic QMods and gives evidence to the universality of Quantificational Modification. Chapter 1 discusses Quantification as semantic interpretation along with the main questions this research intends to answer, while Chapter 2 reviews recent literature on Quantification within and across languages. Chapter 3 focuses on Modern Greek expressions of Quantification and extends chapter 2 into a further discussion about the various syntactic manifestations. Chapters 4 and 5 are extensions to chapters 2 and 3 as they discuss the semantics of specific QMods as 'total' and 'partial' quantifiers, which operate on homomorphic sets of degrees and amounts. Chapter 6 discusses the broader issues in the thesis from a theoretical and typological perspective that establishes Quantificational Modification as a universal and purely semantic subclass of Quantification. Our findings are summarized in chapter 7, followed by suggestions for expanding our investigation into other related areas.