An Analysis of Regulatory Frameworks for Wireless Communications, Societal Concerns, and Risk: The Case of Radio Frequency (RF) Allocation and Licensing 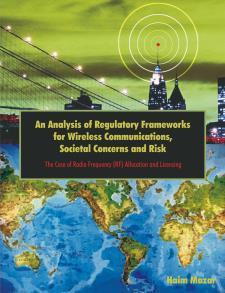 This thesis analyses how and why culture and geography influence the allocation and licensing of the radio frequency (RF) spectrum in different nations. Based on a broad comparative study of 235 countries, an inter-disciplinary approach is used to explore regulatory frameworks and attitudes toward risk. In addition, detailed case studies of the UK, France, the US and Ecuador provide deeper insights into the main contrasting regulatory styles. Three alternative sociological theories are used to analyse and explain the results for both the in-depth and broad brush studies. The Cultural Theory of Mary Douglas and co-workers is first used to categorise countries in terms of perceptual filters. The empirical findings indicate some countries to be apparently exceptional in their behaviour. The theory of Bounded Rationality is used to investigate and explain these apparent irrationalities. Finally, Rational Field Theory shows how beliefs and values guide administrations in their RF regulation. A number of key factors are found to dominate and patterns emerge. The European RF harmonisation is unique. Following European unification, wireless regulation is divided into two major camps (the EU and the US), which differ in their risk concerns, approach to top-down mandated standards, allocation of RF spectrum to licence-exempt bands and type approval process. The adoption of 3G cellular (UMTS versus CDMA2000) and digital TV standards (DVB-T/ATSC/ISDB-T) around the world reflects geopolitical and colonial influence. The language of a country is a significant indicator of its analogue TV standard (SECAM/PAL/NTSC). Interestingly, the longitude of a country to a fair extent defines RF allocation: Africa and West Asia follow Europe, whereas the Americas approximate the US. RF regulation and risk tolerability differ between tropical and non-tropical climates. The collectivised/centralised versus the individualised/market-based rationalities result in different regulatory frameworks and contrasting societal and risk concerns. The success of the top-down European GSM and the bottom-up Wi-Fi standards reveal how the central-planning and market-based approaches have thrived. Attitudes to RF human hazards and spurious emissions levels reveal that the US, Canada and Japan are more tolerant of these radiation risks than Europe. Australia, Canada, New Zealand, UK and USA encourage technological innovation. A practical benefit of this study is that it will give regulators more freedom to choose a rational RF licensing protocol, by better understanding the possibly self-imposed boundaries of cultural and geographical factors which are currently shaping allocation. Academically, there is utility in undertaking a cultural and geographic analysis of a topic that is mostly the domain of engineering, economic and legal analysts.