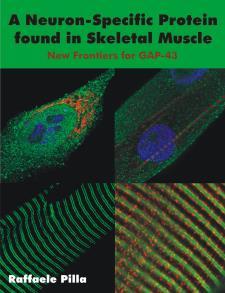 Growth Associated Protein 43 (GAP-43), isolated from rat brain and considered a neuronal marker, is involved in neurite branching, cytoskeleton remodelling, neuronal development and protection. However, GAP-43 mRNA was found in embryonic chicken cells positive to meromyosin, as well as in human satellite cells, myoblasts and myotubes deriving from healthy or dystrophic muscles. Despite these findings, there is no clear evidence about its localization or relationship with other muscle proteins. The aim of this study was to investigate GAP-43 protein expression and localization in C2C12 cells and mice skeletal muscle fibers, using immunoblot and immunofluorescence protocols for confocal mycroscopy. Immunoblot analyses show the presence of GAP-43 in C2C12 cell homogenates as well as in mature muscle fibers. Immunofluorescent images reveal that the protein is localized nearby the external nuclear membranes in C2C12 myoblasts, while in C2C12 myotubes, it has been detected on muscular streaks, in a regular double strand pattern. This localization has been found also in Extensor Digitorum Longus fibers isolated from 1 week, 1 and 24 months old mice. In isolated adult mouse fibers, GAP-43 localization appears to be in relationship with crucial proteins such as triadin, alfa-actinin, RyR, DHPR, as well as mitochondria. In addition, cross-specimen analyses on skeletal muscle cells and mature fibers from Xenopus Laevis (amphibian), rat and human were performed, in order to interpret the results from an evolutionary point of view. In conclusion, these preliminary data confirm the presence of GAP-43 in all the analyzed skeletal muscles, and its localization supports the hypothesis of a possible new functional role in the muscle excitation-contraction coupling process.