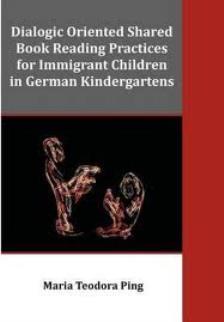 This book describes a doctoral research project which aims at investigating actual practices of dialogic oriented shared book reading targeting immigrant children in German kindergartens. In this particular research project, the potential contributions of these practices to children's German as second language learning were also assessed. The participants of the study were five native German speaking kindergarten teachers (Erzieherinnen) and five groups of four to six children ages 3- 6 years old. The data sources were videotaped shared book reading sessions which were afterwards transcribed and analysed by using content analysis method. The analysis phases of the study revealed the following findings: 1) there were three different forms of interactions found during the observed shared book reading situations; 2) there were various educators' strategies and children's behaviours observed during the videotaped shared book reading situations, which to some extent were congruent; 3) there were potential contributions of different forms of interactions to children's second language learning. Eventually, the findings of this study are expected to give theoretical and methodological contributions to the field of early childhood second language learning. Moreover, it is also expected to be a solid empirical basis to support the improvement of language promotion programs for immigrant children in German kindergartens.