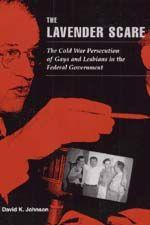 The McCarthy era is generally considered the worst period of political repression in recent American history. But while the famous question, "Are you now or have you ever been a member of the Communist Party?" resonated in the halls of Congress, security officials were posing another question at least as frequently, if more discreetly: "Information has come to the attention of the Civil Service Commission that you are a homosexual. What comment do you care to make?"

Historian David K. Johnson here relates the frightening, untold story of how, during the Cold War, homosexuals were considered as dangerous a threat to national security as Communists. Charges that the Roosevelt and Truman administrations were havens for homosexuals proved a potent political weapon, sparking a "Lavender Scare" more vehement and long-lasting than McCarthy's Red Scare. Relying on newly declassified documents, years of research in the records of the National Archives and the FBI, and interviews with former civil servants, Johnson recreates the vibrant gay subculture that flourished in New Deal-era Washington and takes us inside the security interrogation rooms where thousands of Americans were questioned about their sex lives. The homosexual purges ended promising careers, ruined lives, and pushed many to suicide. But, as Johnson also shows, the purges brought victims together to protest their treatment, helping launch a new civil rights struggle.

The Lavender Scare shatters the myth that homosexuality has only recently become a national political issue, changing the way we think about both the McCarthy era and the origins of the gay rights movement. And perhaps just as importantly, this book is a cautionary tale, reminding us of how acts taken by the government in the name of "national security" during the Cold War resulted in the infringement of the civil liberties of thousands of Americans.