The Plan of Chicago

Daniel Burnham and the Remaking of the American City 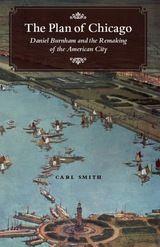 Arguably the most influential document in the history of urban planning, Daniel Burnham’s 1909 Plan of Chicago, coauthored by Edward Bennett and produced in collaboration with the Commercial Club of Chicago, proposed many of the city’s most distinctive features, including its lakefront parks and roadways, the Magnificent Mile, and Navy Pier. Carl Smith’s fascinating history reveals the Plan’s central role in shaping the ways people envision the cityscape and urban life itself.

Smith’s concise and accessible narrative begins with a survey of Chicago’s stunning rise from a tiny frontier settlement to the nation’s second-largest city. He then offers an illuminating exploration of the Plan’s creation and reveals how it embodies the renowned architect’s belief that cities can and must be remade for the better. The Plan defined the City Beautiful movement and was the first comprehensive attempt to reimagine a major American city. Smith points out the ways the Plan continues to influence debates, even a century after its publication, about how to create a vibrant and habitable urban environment.

Richly illustrated and incisively written, his insightful book will be indispensable to our understanding of Chicago, Daniel Burnham, and the emergence of the modern city.