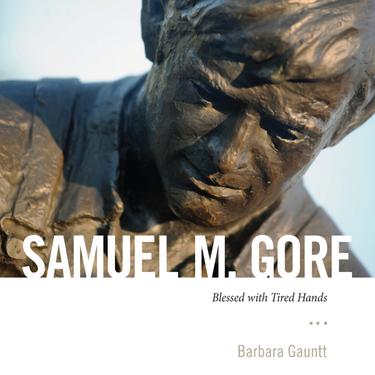 Born in Coolidge, Texas, Samuel Marshall Gore was the sixth of ten children born to a Baptist preacher and a mother described as “an angel.” From early childhood, Samuel Gore remembers enjoying making things, and gives credit to his mother and grandmother for his interest in art. Gore went on to be an art teacher and professor for more than fifty years, mostly at Mississippi College in Clinton, Mississippi. He has shown work in exhibitions and galleries for more than forty years. In 2012 the Mississippi Institute of Arts and Letters honored him with its Lifetime Achievement Award.

In the first part of this volume, Barbara Gauntt traces how a concept in the mind of the artist comes to execution. Gore uses sketches on scraps of paper to inform studies in clay, as the piece Christ, Fulfillment of the Law begins to take its inspired shape. The project, expected to take about a year, lasts nearly two as Gore works to capture the constantly changing image forming in his mind. The 12' x 8' bronze, bas relief sculpture, a sister piece to Moses, Deliverer of the Law commissioned for the Mississippi College School of Law, moves from a small work area in the sculptor’s home to a shop on his property. There he builds the full-size piece on an armature of wood, foam board, and netting covered with clay. From chaos arises the beauty of detailed faces and a work of art that tells a story.

The second section of the book covers the artist’s career from the late 1940s into the twenty-first century. Superb photographs of both two- and three-dimensional pieces show the artist’s diverse style and talent. Gore says that he “want[s] people to put their hands on [his] sculpture” because that is how he experiences his art. Gore sees no end in sight to his work. Moses started preaching at the age of eighty, so Gore figures that he is just getting started.

This volume features detailed information about all of the artwork included; an interview with Samuel Gore in which the artist discusses his career, technique, and philosophy; a timeline of his life and career; and a foreword by noted Mississippi artist and former student, Wyatt Waters.