Once in a Lifetime

Reflections of a Mississippi First Lady 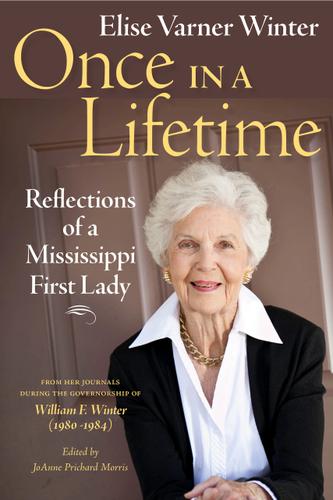 Once in a Lifetime reveals the broad range of Elise Varner Winter's activities as first lady of Mississippi during the term of her husband, Governor William F. Winter (1980-1984). Drawn from her personal journal, which she kept daily, this account includes the frustrating moments as well as the exhilarating ones, from keeping house to visiting the White House. The position of a state's first lady is one of the most public of roles. Yet few people know what a first lady actually does. In Elise Winter's memoir, her sense of history, her talent, and her perseverance to record her activities and observations provide a unique opportunity for the reader to understand what life in the Governor's Mansion was really like on a daily basis.

This book reveals her traditional roles--planner of elegant dinners, sophisticated hostess, hands-on gardener, and steward of the Mansion and its historic collection of antique furniture and decorative arts. But she emerged as a modern first lady, intensely interested in public education and in the state penitentiary, for which she developed several important initiatives. She recounts fascinating events from Governor Winter's administration, its tensions and its accomplishments, such as passage of the Education Reform Act, a success in which Elise Winter played an indispensable role. Many of the issues of thirty years ago remain critical today--insufficient funding for education, budget deficits, prison overcrowding, and the need for prison reform.

Elise Winter observes everyone and everything with a fresh eye for detail and describes them all with honesty, clarity, and simplicity. Her observations reflect her intellect and insight, as well as her sense of humor. This is a woman's story, a human story, about hopes and doubts, about setting high standards and sometimes feeling inadequate, and about the imperative of continual efforts to make her state a better place for all who live there.