Saving the Constitution from Lawyers 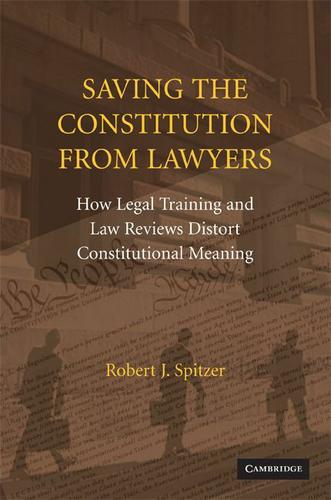 This book is a sweeping indictment of the legal profession in the realm of constitutional interpretation. The adversarial, advocacy-based American legal system is well suited to American justice, in which one-sided arguments collide to produce a just outcome. But when applied to constitutional theorizing, the result is selective analysis, overheated rhetoric, distorted facts, and overstated conclusions. Such wayward theorizing finds its way into print in the nation's over 600 law journals – professional publications run by law students, not faculty or other professionals – and peer review is almost never used to evaluate worthiness. The consequences of this system are examined through three timely cases: the presidential veto, the 'unitary theory' of the president's commander-in-chief power, and the Second Amendment's 'right to bear arms'. In each case, law reviews were the breeding ground for defective theories that won false legitimacy and political currency. This book concludes with recommendations for reform.