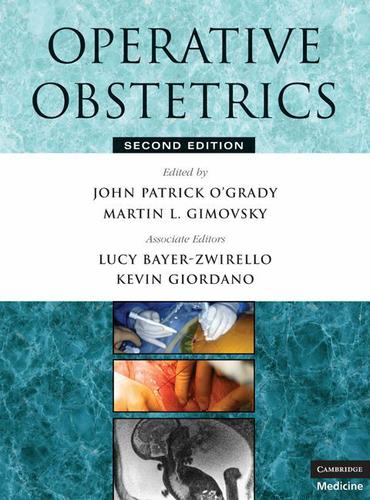 The ten years since the first edition of Operative Obstetrics have witnessed considerable changes in obstetric practice. There has been a continued increase in the rate of cesarean delivery, and the use of minimally-invasive surgery has rapidly gained popularity. Social changes affecting practice have also been significant, prompting a re-evaluation of the appropriateness of certain types of operations during pregnancy. This fully-updated edition includes chapters on cesarean delivery, birth injury, ectopic pregnancy, and common surgical complications. It features a new discussion of surgical procedures performed by non-physicians and an updated treatment of fetal surgery. The text also considers complicated and controversial subjects such as cervical insufficiency, pregnancy termination, instrumental delivery, and shoulder dystocia. Each of the four sections includes an in-depth analysis of the important ethical and legal issues underlying practice for the area in question. An expanded appendix reviews legal concepts pertinent to practitioners in the field of obstetrics.