Authoritarianism and Polarization in American Politics 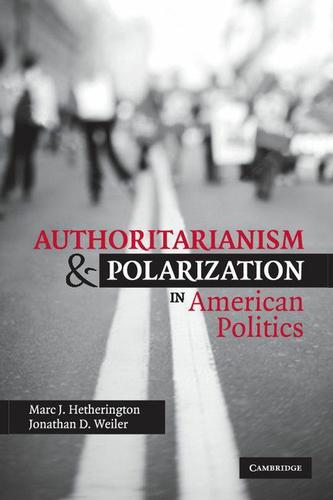 Although politics at the elite level has been polarized for some time, a scholarly controversy has raged over whether ordinary Americans are polarized. This book argues that they are and that the reason is growing polarization of worldviews - what guides people's view of right and wrong and good and evil. These differences in worldview are rooted in what Marc J. Hetherington and Jonathan D. Weiler describe as authoritarianism. They show that differences of opinion concerning the most provocative issues on the contemporary issue agenda - about race, gay marriage, illegal immigration, and the use of force to resolve security problems - reflect differences in individuals' levels of authoritarianism. Events and strategic political decisions have conspired to make all these considerations more salient. The authors demonstrate that the left and the right have coalesced around these opposing worldviews, which has provided politics with more incandescent hues than before.