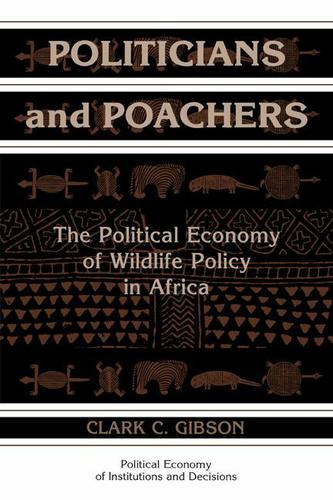 Although wildlife fascinates citizens of industrialized countries, little is known about the politics of wildlife policy in Africa. In this innovative book, Clark Gibson challenges the rhetoric of television documentaries and conservation organizations to explore the politics behind the creation and change of wildlife policy in Africa. This book examines what Clark views as a central puzzle in the debate: Why do African governments create policies that apparently fail to protect wildlife? Moving beyond explanations of bureaucratic inefficiency and corrupt dictatorships, Gibson argues that biologically disastrous policies are retained because they meet the distributive goals of politicians and bureaucrats. Using evidence from Zambia, Kenya, and Zimbabwe, Gibson shows how institutions encourage politicians and bureaucrats to construct wildlife policies that further their own interests. Different configurations of electoral laws, legislatures, party structures, interest groups, and traditional authorities in each country shape the choices of policymakers - many of which are not consonant with conservation. This book will appeal to students of institutions, comparative politics, natural resource policymaking, African politics, and wildlife conservationists.