Marx, the Young Hegelians, and the Origins of Radical Social Theory 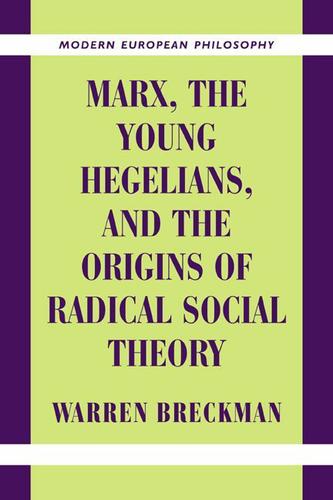 This is the first major study of Marx and the Young Hegelians in twenty years. The book offers a new interpretation of Marx's early development, the political dimension of Young Hegelianism, and that movement's relationship to political and intellectual currents in early nineteenth-century Germany. Warren Breckman challenges the orthodox distinction drawn between the exclusively religious concerns of Hegelians in the 1830s and the sociopolitical preoccupations of the 1840s. He shows that there are inextricable connections between the theological, political and social discourses of the Hegelians in the 1830s. The book draws together an account of major figures such as Feuerbach and Marx, with discussions of lesser-known but significant figures such as Eduard Gans, August Cieszkowski, Moses Hess, F. W. J. Schelling as well as such movements as French Saint-Simonianism and 'positive philosophy'. Wide-ranging in scope and synthetic in approach, this is an important book for historians of philosophy, theology, political theory and nineteenth-century ideas.