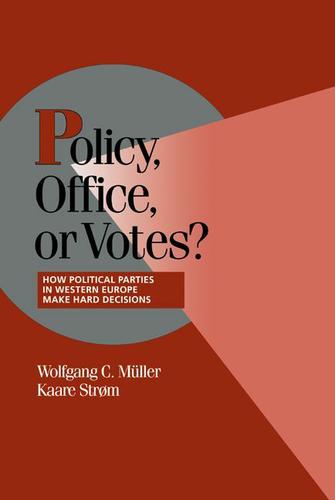 Leaders of political parties often have to choose between conflicting objectives, such as influence on policy, control of the government, and support among the voters. This book examines the behaviour of political parties in situations where they experience conflict between two or more important objectives. The volume contains a theoretical introduction and case studies of party leaders in Germany, Italy, France and Spain as well as six smaller European democracies. Each case focuses on the behaviour of one of several parties in situations of goal conflict, such as the 'historic compromise' in Italy, the 1982 Wende in West Germany, the making of the new Swedish constitution in the 1970s, and the termination of the Austrian 'black-red' grand coalition. In their conclusions, the editors discuss how such leadership decisions can be understood and examine the causes of different choices among party leaders.