A Study in the Thought of Paul Ricoeur and Jürgen Habermas 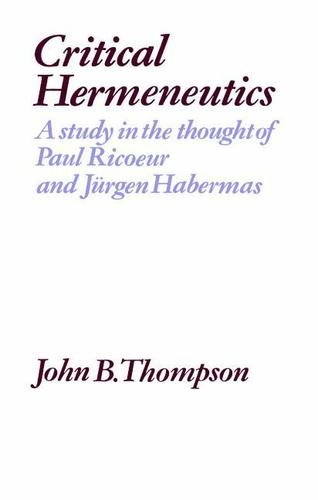 This is a study in the philosophy of social science. It takes the form of a comparative critique of three contemporary approaches: ordinary language philosophy, hermeneutics and critical theory, represented here respectively by Ludwig Wittgenstein, Paul Ricoeur and Jürgen Habermas. Part I is devoted to an exposition of these authors' views and of the traditions to which they belong. Its unifying thread is their common concern with language, a concern which nonetheless reveals important differences of approach. For whereas ordinary language philosophers tend to treat linguistic activity as the ultimate object of inquiry, both Ricoeur and Habermas regard it as a medium which betrays more fundamental dimensions of human experience and the social world. Part II complements the exposition with a critical analysis of its central themes: the conceptualisation of action, the methodology of interpretation, and the theory of reference and truth. The author defends many aspects of the work of Ricoeur and Habermas, such as the emphasis on power and ideology, the strategy of depth interpretation, and the link between consensus and truth; but he argues that there are serious deficiencies and obscurities in their work. He proposes solutions to these difficulties and concludes with a sketch of a critical and rationally justified theory for the interpretation of action - a critical hermeneutics.