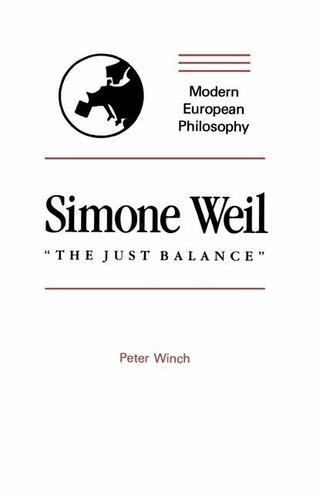 This book examines the religious, social, and political thought of Simone Weil in the context of the rigorous philosophical thinking out of which it grew. It also explores illuminating parallels between these ideas and ideas that were simultaneously being developed by Ludwig Wittgenstein. Simone Weil developed a conception of the relation between human beings and nature which made it difficult for her to explain mutual understanding and justice. Her wrestling with this difficulty coincided with a considerable sharpening of her religious sensibility, and led to a new concept of the natural and social orders involving a supernatural dimension, within which the concepts of beauty and justice are paramount. Professor Winch provides a fresh perspective on the complete span of Simone Weil's work, and discusses the fundamental difficulties of tracing the dividing line between philosophy and religion.