Hegel, Nietzsche and the Criticism of Metaphysics 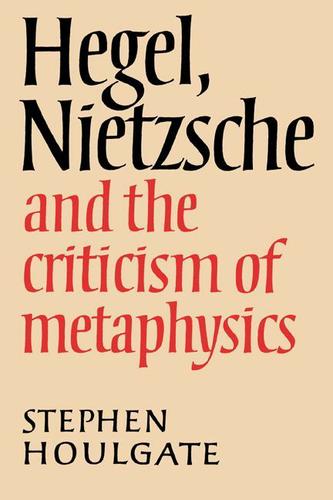 This study of Hegel and Nietzsche evaluates and compares their work through their common criticism of the metaphysics for operating with conceptual oppositions such as being/becoming and egoism/altruism. Dr Houlgate exposes Nietzsche's critique as employing the distinction of Life and Thought, which itself constitutes a metaphysical dualism of the kind Nietzsche attacks. By comparison Hegel is shown to provide a more profound critique of metaphysical dualism by applying his philosophy of the dialectic, which sees such alleged opposites as defining components of a dynamic. In choosing to study a theme so fundamental to both philosophers' work, Houlgate has established a framework within which to evaluate the Hegel-Nietzsche debate; to make the first full study of Nietzsche's view of Hegel's work; and to compare Nietzsche's Dionysic philosophy with Hegel's dialectical philosophy by focusing on tragedy, a subject central to the philosophy of both.