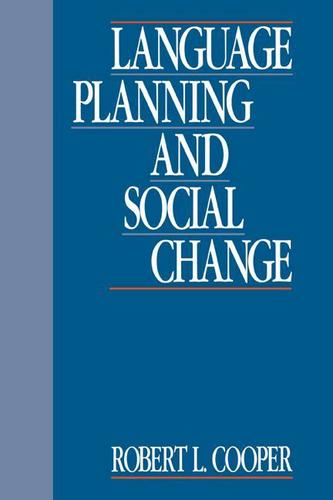 This book describes the ways in which politicians, church leaders, generals, leaders of national movements and others try to influence our use of language. Professor Cooper argues that language planning is never attempted for its own sake. Rather it is carried out for the attainment of nonlinguistic ends such as national integration, political control, economic development, the pacification of minority groups, and mass mobilization. Many examples are discussed, including the revival of Hebrew as a spoken language, feminist campaigns to eliminate sexist bias in language, adult literacy campaigns, the plain language movement, efforts to distinguish American from British spelling, the American bilingual education movement, the creation of writing systems for unwritten languages, and campaigns to rid languages of foreign terms. Language Planning and Social Change is the first book to define the field of language planning and relate it to other aspects of social planning and to social change. The book is accessible and presupposes no special background in linguistics, sociology or political science. It will appeal to applied linguists and to those sociologists, economists and political scientists with an interest in language.