Consciousness and Revolution in Soviet Philosophy

From the Bolsheviks to Evald Ilyenkov 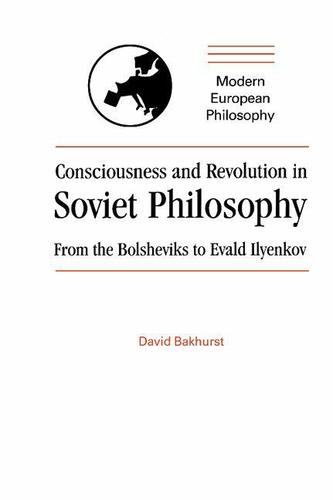 This 1991 book is a critical study of the philosophical culture of the USSR, and the first substantial treatment of a Soviet philosopher's work by a Western author. The book identifies a tradition within Soviet Marxism that has produced significant theories of the nature of the self and human activity, of the origins of value and meaning, and of the relation of thought and language. The tradition is presented through the work of Evald Ilyenkov (1924–1979), the man who did most to rejuvenate Soviet philosophy after its suppression under Stalin. Professor Bakhurst sets Ilyenkov's contribution against the background of the bitter debates that divided Soviet philosophers in the 1920s, of Vygotsky's 'socio-historical psychology', of the controversies over Lenin's legacy, and of the philosophy of Stalinism. He traces Ilyenkov's tense relationship with the Soviet philosophical establishment and his passionate polemics with Soviet opponents. This book offers a unique insight into the world of Soviet philosophy, the place of politics within it, and its prospects in the age of glasnost and perestroika.