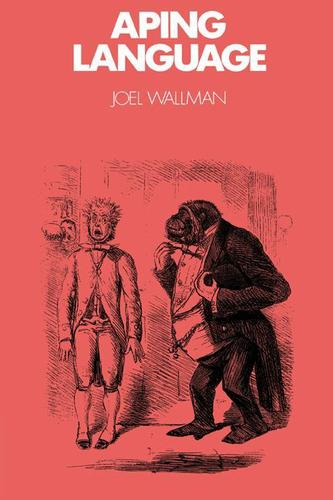 Language is regarded, at least in most intellectual traditions, as the quintessential human attribute, at once evidence and source of most that is considered transcendent in us, distinguishing ours from the merely mechanical nature of the beast. Even if language did not have the sacrosanct status it does in our conception of human nature, however, the question of its presence in other species would still promote argument, for we lack any universally accepted, defining features of language, ones that would allow us to identify it unequivocally ours from other species and contention over the crucial attributes of language are responsible for the stridency of the debate over whether nonhuman animals can learn language. Aping Language is a critical assessment of each of the recent experiments designed to impact a language, either natural or invented, to an ape. The performance of the animals in these experiments is compared with the course of semantic and syntactic development in children, both speaking and signing. The book goes on to examine what is known about the neurological, cognitive, and specifically linguistic attributes of our species that subserve language, and it discusses how they might have come into existence. Finally, the communication of nonhuman primates in nature is assayed to consider whether or not it was reasonable to assume, as the experimenters in these projects did, that apes possess an ability to acquire language.