The Complete Guide to Your Personal Finances Online: Step-by-Step Instructions to Take Control of Your Financial Future Using the Internet 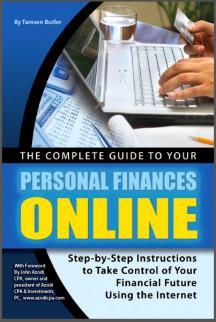 With the growth of the Internet, the personal finance industry has equally boomed, allowing individuals who previously had no control of their money to take the reins and start banking, investing, and controlling funds online without the need for pricey professional help. In 2002, the number of people investing online was around 20 million. In 2006, that number had ballooned to almost 55 million and the estimates for the 2007 fiscal year show that it has risen as much as 40 percent higher as more people realize the potential that online services provide. But for many people, the complexities of finance are still too much. For that reason, this book was written