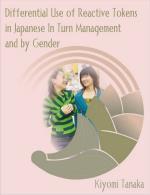 This study investigated the distribution of Reactive Tokens in natural conversation by male and female speakers of Japanese. According to Clancy et al. a reactive token (RT) is "a short utterance produced by an interlocutor who is playing a listener's role during the other interlocutor's speakership" (1996, p. 355). Clancy et al. classify RTs into five types: backchannels, reactive expressions, collaborative finishes, repetitions, and resumptive openers. This study investigated the distribution of these five types of RTs. In particular, it studied their use in turn management and their distribution by gender. To identify the distribution of the five types of RTs more clearly, all five types of Reactive Tokens were divided into two levels: those that occurred at the boundary of a Pause-bounded Phrasal Unit (PPU) and those that occurred within a PPU. The participants in this study were 82 pairs of native speakers of Japanese: 82 female and 82 male native speakers of Japanese between 18 and 22 years of age. All pairs consisted of classmates or friends in the same university. Participants were audiotaped during 20 minutes of natural conversation. Six minutes from each conversation were extracted, and RTs were identified and coded using WaveSurfer (Sjölander & Beskow, 2000). Frequencies of RTs per minute were then calculated for each participant. Using principal components analysis, three coherent components were identified among the ten categories (five RT types each at two different levels). These three components were labeled sequential RTs, accompanying RTs, and repetitive RTs. Also, MANOVA and ANOVA revealed significant differences between Japanese male and female RT use, with females using more accompanying RTs than males. These findings suggest that different types of Reactive Tokens serve different turn-taking functions in Japanese, and that factors besides language, such as gender, may affect a speaker's choice of a particular type of Reactive Token.