The Priority Method for Korean ESL Students: Consonants and Vowels 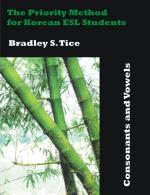 The Priority Method evolved from theories from first and second language acquisition and child language development. Along with error analysis theories, technical advances in equipment have allowed the Priority Method to offer a complete language diagnostic, analysis and training format. Its significant variation from all previous SLA pedagogy is that it concentrates on areas of weakness, prioritizing common areas of transitional errors from L1 to L2, that commonly occur in the phonetic production and delivery of the ESL student, and focuses on the key areas that have significant sociolinguistic and linguistic effects on the ESL student. Why prioritize errors over other aspects of second language learning? Because errors are the significant areas where the student's self confidence and progress come into play. Because negative aspects in any or all of the above will impede and/or stigmatize the ESL student and can be a major factor in having the student quit. Many errors are common to each ESL language group, giving that group a preliminary map of errors that can be expected before the student arrives at that point. The specific phonetic area covered will be common consonant and vowel errors in the ESL student. There will be a text, workbook and a tape of which the workbook and tape will interact with each other using the Priority Method and a Learning Loop. The Learning Loop is a term that describes the learning system used to facilitate the correct recognition and production of the English sound pattern. It uses two tape recorders of which one is to play the tape with the exercises on it of a Model of English pronunciation. The second tape recorder is recording both the Model pronunciation and the student's attempt to duplicate the Model of English sound pattern. Because the student hears only those sound patterns that are similar or the same to their L1 language the need to compare their L2 production of English with that of a Model of English will result in a more accurate diagnosis. The potential of this method as a supplement to any language course or program is great as it can be used with any language group and at any level of learning.