Is an Objective Measuring System for Facial Attractiveness Possible? 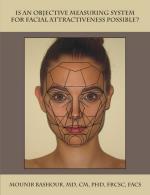 here exists a need for the creation of an objective system for measuring facial attractiveness and along with it a detailed mathematical analysis and understanding of facial sexual dimorphism. Both the areas of ophthalmic and facial plastic and reconstructive surgery and the areas of facial attractiveness and recognition research in psychology would greatly benefit from achieving these goals. The objective of this work has been to: develop and test a system for measuring facial attractiveness in an objective manner; and analyze orbital and facial sexual dimorphism. A facial overlay system or mask variously called the phi, archetypal, golden, or golden ratio mask has been claimed to be capable of being adapted to create an objective system for measuring facial attractiveness. The central hypothesis of the thesis is that the phi mask can be used to create an objective measurement system for facial attractiveness. Over a period of seven years, we have created a standardized high resolution photographic facial database of 18-30 year old male and female adults, as well as database of linked facial anthropometric and photogrammetric measurement data. We have also designed a system using the phi mask that attempts to measure facial attractiveness objectively, and tested it against our facial database. Finally, we have made a detailed analysis of the measurement data and previous literature with respect to precisely defining sexual dimorphism around the eyes and face. Results support our central hypothesis in that the phi mask in its current form does yield a measure for objective attractiveness that correlates to the current "gold standard" measure of attractiveness - 'truth of consensus'. However, while the mask is capable of explaining a major portion of the variance in facial attractiveness, it is not the final complete answer. Strengths, weaknesses and limitations of the approach and the model used are discussed, and ideas and directions for further research to develop a more accurate system are suggested. The analysis of the orbits and the face for sexual dimorphism yielded a great deal of new data and have lead to an understanding of sexual differences that have practical implications for both surgery and further facial research. Applications of the research include: Preoperative aids for planning plastic and reconstructive surgery, cosmetic surgery, and sex-altering surgery; standards for analyzing the eyes for academic study; standards for quantifying the features of the eyes for use in an identification system; aid in application of cosmetics; aid in understanding the psychological impact of eyes on the judgment of attractiveness; creation of a standardized database of digital high-resolution facial photographs and linked anthropometric and demographic database to be made available to the world community of facial researchers; use of the databases by researchers for face recognition research, facial attractiveness research etc.