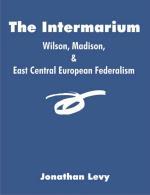 Pub_AbstractText~: This thesis proposes an alternative governance structure for east central Europe - the Intermarium. The Intermarium is based on the development of a supplementary federal structure capable of controlling factionalism and nationalism utilizing concepts from James Madison's Tenth Federalist. In particular, James Madison's approach to mitigating and preventing the formation of dangerous factions is found to be compatible with preexisting notions of federalism in east central Europe and offers a potential regional political solution that merits further study. In reaching the above proposal, the concepts of Wilsonian national self -determination, Pan European federalism, functionalism and historical east central European variants of federalism are explored along with their leading personalities. At the author's request over 100 previously unknown documents were declassified by a variety of intelligence agencies including the CIA, Army Counterintelligence, and FBI. In addition, three lengthy interviews were conducted with former American intelligence agent, William Gowen, who in 1947 and 1948 investigated and worked with several of the organizations and individuals profiled. The tragic history of east central Europe in the 20th Century consisted of bloody ethnic conflict, foreign invasion, and occupation with the lingering effects still evident today. While there is persuasive authority to suggest that the future for east central Europe is one of harmonious relations, liberal democracy and economic prosperity other forecasts predict decades yet of bloody conflict as the Russian Federation and its borderlands resolve rivalries fueled by national self-determination and irredentism. By developing a federal alternative to the European Union to be know popularly as the Intermarium, east central Europe might effectively pool its resources and meet the foreign relations and security challenges unique to the region rather than relying upon far away Brussels in the event of a crisis. Regional federation as exemplified by east central Europe's unique heritage may prove to be just the bridging mechanism needed to accelerate the goal of Pan Europe or provide a safe harbor from conflict in the event of the EU's inability to address future crises.