Not in God's Image: A Comparative Study of Women's Body Image in Pagan, Jewish, and Buddhist Religions 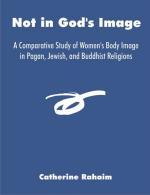 This study investigated the impact that women's body image had on prehistoric, ancient Greek, and developing Jewish and Tibetan Buddhist religions. Questions focused on the validity of a Mother Goddess concept, the justifications used to reinforce negativity about women's bodies, and the roles women assumed to maintain their spirituality. The evolution of patriarchal leadership was investigated, given the archaeological evidence that women's biological functions were seen as connected to the divine world and in parallel with the mysteries of nature. Data was drawn from archaeological, historical, and mythological accounts to present an interpretation of women's bodies through ancient times. Scriptural and doctrinal changes concerning women's body image were examined in developing Judaism and Tibetan Buddhism. The investigation concluded that initially God as creator was perceived as female, and high status was accorded to women whose bodies functioned like the Divine. The study further concluded that the reversal of that status was connected to two issues: the subjugation of the Mother Goddess by nomadic invaders, and controls exerted to regulate food supply, land ownership, and new moral codes based on male leadership. Women, in their dependent status, assumed supporting roles in religion. In ancient Greece, women faired the best in promoting their unique ability to safeguard the polis and its food supply by participating in exclusive festivals. In Judaism, women's body excluded her participation beyond home rituals. In Tibetan Buddhism, women achieve status by ignoring their physical states. Clarification of the divine as having male and female attributes is an avenue available only in "alternative" approaches in all three religions.