The Re-Emergence of the Divine Feminine and its Significance for Spiritual, Psychological and Evolutionary Growth 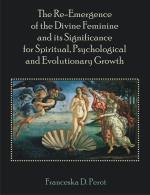 For millennia a patriarchal society has ruled to the exclusion of the feminine or the Goddess who was peacefully worshipped before being completely replaced by a warrior Father God. The Goddess and hence women have been relegated to second-class citizens. The concept of woman as defined by traditional patriarchal society has disempowered the female sex and deemed them inferior. This exclusion and denigration of the divine feminine has done serious damage to women and men both individually and collectively, not to mention the damage this masculine mindset has caused to the environment through wars and other aggressive acts. In this dissertation, the history of the Goddess from the Paleolithic to the present is discussed and causes for the rise of patriarchy, such as invasions by warrior cults, the advent of language and the development of the ego are explored. Then the re-emergence of the divine feminine and its psychological, spiritual and evolutionary effects are discussed. This negative perception of the self by women is challenged by re-imaging women after the Greek Goddess archetypes: Athena, Hera, Demeter, Artemis, Aphrodite and Persephone. The Goddess archetypes are discussed in a therapeutical context as well as other therapeutical techniques such as aspecting, visualizations and women's' groups and circles. The author proposes the re-introduction of the "Sacred Marriage," a sacred ritual performed in temples since Neolithic times and in certain sects today, as a technique for therapy. This sexual ritual along with an understanding of the history of the divine feminine will have individual, collective and evolutionary effects with its use.