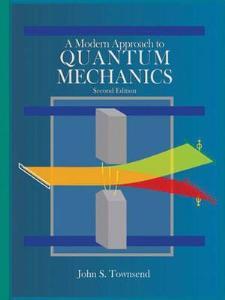 Using an innovative approach that students find both accessible and exciting, A Modern Approach to Quantum Mechanics, Second Edition lays out the foundations of quantum mechanics through the physics of intrinsic spin.  Written to serve as the primary textbook for an upper-division course in quantum mechanics, Townsend's text gives professors and students a refreshing alternative to the old style of teaching, by allowing the basic physics of spin systems to drive the introduction of concepts such as Dirac notation, operators, eigenstates and eigenvalues, time evolution in quantum mechanics, and entanglement.. Chapters 6 through 10 cover the more traditional subjects in wave mechanics—the Schrödinger equation in position space, the harmonic oscillator, orbital angular momentum, and central potentials—but they are motivated by the foundations developed in the earlier chapters. Students using this text will perceive wave mechanics as an important aspect of quantum mechanics, but not necessarily the core of the subject.  Subsequent chapters are devoted to perturbation theory, identical particles, scattering, and the interaction of atoms with radiation, and an optional chapter on path integrals is also included.  This new edition has been revised throughout to include many more worked examples and end-of-chapter problems, further enabling students to gain a complete mastery of quantum mechanics.  It also includes new sections on quantum teleportation, the density operator, coherent states, and cavity quantum electrodynamics.  An Instructor's Manual for adopting professors will be available.