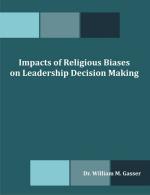 The subtle nature of bias can cause leaders to be unaware of religiously based influences. The outcome can be both positive and negative. The leader can make decisions that are more effective by maximizing useful paradigms and constructs, or make less effective and inappropriate decisions through lack of evaluation of alternative approaches, data and responses. In either scenario, understanding one's internal nature is integral to maximizing one's leadership abilities. This qualitative study examined how United States commissioned and noncommissioned military leaders stationed in Europe described effects of religion and their religious upbringing on their decision-making process, and how they viewed the quality of those decisions. With one exception, all the leaders drew connections between their views of how they viewed their decisions and their religious or spiritual backgrounds. The study revealed prominent themes: (a) there is a presence of religious beliefs that helps guide leaders in making their decision, (b) leaders see an importance of religious principles in the decisions leaders make, (c) moral principles are involved in decisions, (d) leaders believe that the rightness of decisions can be innate and transcendent (e) humans have intrinsic, naturally occurring spiritual beliefs that mankind can use to guide decisions, (f) there is a right-wrong aspect of decisions, and (g) decisions can be based on the ethical values of the decision-maker.