Disrupting Fraternity Culture: Folklore and the Construction of Violence Against Women 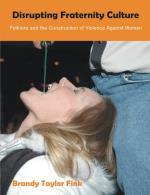 Disrupting Fraternity Culture explores how young men and women perform male and female roles to "fit in" during the college or young adult years. It is arguable that many young men "perform" the role of the hegemonic male to fit in among peers, and that performing the hegemonic male is to perform acts of violence against women. This project actively examines university organizations and institutions, such as fraternities and sororities, which can encourage anti-female attitudes. All of the narratives used in this study were given willingly and given primarily by peers. The names of the individuals and the names of the fraternity and sorority houses the individuals belong to will not be revealed in this project. Fraternities and sororities are useful institutions to study because so many young men and women desire to become a part of Greek culture, and in order to fit in, may not realize that they are contributing to and maintaining an institution of violence against women. It is worthy to explore why so many young men and women choose to partake in this elective rite of passage, especially considering the mental and physical hazing men and women endure. Both men and women are telling stories and participating in rituals that objectify women, and the attitudes and behaviors conveyed in these environments are ubiquitously contributing to views on troubling violence.