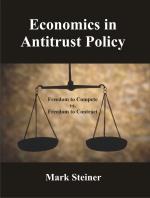 In the field of antitrust, the freedoms to contract and compete can and do contradict. Profit-maximizing companies desire perfectly competitive input markets to minimize their costs, but want monopolistic markets for their outputs to maximize their profits. Consequently, they have strong incentives to undermine competition in their output markets. In a world without antitrust laws, many companies would thus eliminate competition by using their freedom to contract, either by entering into legally enforceable agreements which fix prices or divide up markets, or by merging and acquiring rivals to gain market control. Therefore, guaranteeing and safeguarding companies' abilities to compete comes at the cost of restricting their freedoms to contract. The states role in this task is a delicate one though: government intervention itself necessarily limits the economic freedom of individuals and firms, and limiting the freedom of contract has potentially detrimental effects on economic activity as well. Hence, antitrust policy must find the right balance between the two freedoms of competition and contract, allowing competition to flourish while upholding the contractual freedoms necessary for a functioning market. The policies in the U.S. and Europe used to protect competition with per se rules, setting clear boundaries for the freedom to contract where it interfered with the freedom to compete. Over the past decades, improvements in economic analysis provided measurable dimensions for 'competition' through measures like efficiency and welfare. With these new and complex economic tools, the aim of an antitrust policy moved away from an 'indirect' mechanism which provided and enforced a strict framework of negative per se rules within which the competitive process was allowed to happen. The current policies directly aim at promoting welfare by attempting to 'balance' the welfare effects of individual business practices, permitting contracts or mergers with benign effects and prohibiting contracts with detrimental effects on welfare in potentially every case. These economic insights have promoted a better understanding of the competitive process and contributed to improved antitrust rules. However, in the actual enforcement of antitrust laws, recent developments caused by the influence of economic analysis have had a detrimental impact on antitrust policy in both the U.S. and the EU. First, it increased the discretion of competition authorities, lowering legal certainty for companies and increasing the potential for wrong decisions. Second, it gave companies incentives to waste resources on rent seeking activities by using economic analyses to demonstrate efficiencies in complicated and timely investigations and litigation. And third, the predominant use of economic analysis has massively increased the costs of enforcement. This thesis is the first one to depict these negative effects caused by recent developments and shows that a policy with clear limitations through proposed per se rules would be superior for it would eliminate the illustrated negative effects.