Leading Questions Regarding the Conceptualization and Reality of Violence in Society, Second Edition 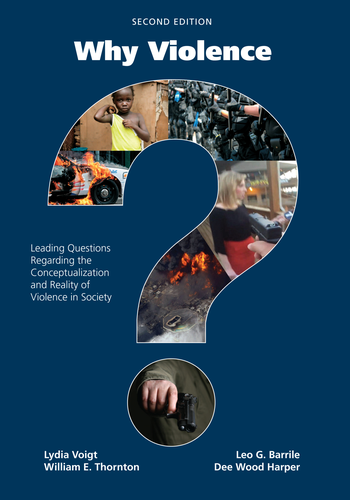 Violence is among the foremost social problems confronting human beings in democratic societies, particularly in the United States. The problem of violence extends beyond its expression as a criminal justice or a public health or a human rights issue, requiring a holistic, integrated understanding of various perspectives as well as a critical consideration of approaches and solutions. The second edition of Why Violence? not only covers age-old questions such as why some human beings, under certain circumstances, react in violent or aggressive ways and others do not and why some social forces/institutions tend to encourage or exacerbate violence and others do not, the book also treats questions conventionally not associated with violence. For instance, why are public policies or official actions associated with evidence of social injustice and violation of human rights such as mass incarceration, homelessness, environmental degradation, and gross abuse of power not considered violence per se? In this sense, the book serves to fill a gap in the literature by raising not only the enduring questions of violence, but also new questions about the conceptualization and reality of violence.

The second edition of Why Violence? offers a significantly enhanced treatment of the complexities and controversies surrounding the problem of violence with special emphasis on violence as a violation of democratic/constitutional values and principles threatening human beings living in democratic societies today. The book advances the idea that in addition to rhetorical affirmation of democratic ideals, a greater demonstrable commitment to and compliance with democratic and constitutional rights and values (including acknowledgement of the antithetical relationship between violence and democracy and a commitment to nonviolence) is arguably the most effective preventive measure against the threat of violence in our contemporary world.

The book begins with the question "Why Violence?" and ends with the question "Why not peace?". Drawing upon criminology, sociology, anthropology, psychology, political science, economics, history, philosophy, and law, Why Violence? brings together state-of-the-art thinking and associated research/knowledge-base on violence. It provides a critical analysis of the interplay between popular questions of why there is a "disconnect" between the public's understanding of violence, including official responses to violence and scientific evidence. The most current theories and research evidence from interdisciplinary viewpoints are presented and critically considered with respect to their relative strengths and weaknesses and potential for finding solutions to the problem of violence.