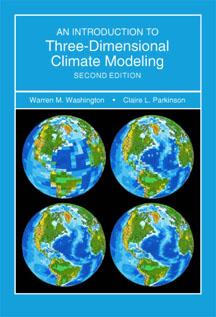 This book provides an introduction to the development of three-dimensional climate models, including their four major components: atmosphere, ocean, land/vegetation, and sea ice. The fundamental processes in each component and the interactions among them are explained using basic scientific principles, and elements of the numerical methods used in solving the model equations are also provided. The authors show how the theory and models grew historically and how well they are able to account for known aspects of the climate system. This book is written so that a reader who is only vaguely aware of climate models will be able to gain an understanding of what the models are attempting to simulate, how the models are constructed, what the models have succeeded in simulating, and how the models are being used. Examples illustrating the use of the models to simulate aspects of the current climate system are followed by examples illustrating the application of the models to important scientific areas such as understanding paleoclimates, the last millennium, the El Nino/Southern Oscillation, and the effects of increasing greenhouse gas concentrations on future climate change. The book is appropriate for scientists, graduate students, and upper-level undergraduates and can be used as a textbook or for self study and reference. The authors have considerably updated the book from the first edition by adding descriptions of many techniques and results developed since the mid-1980s.