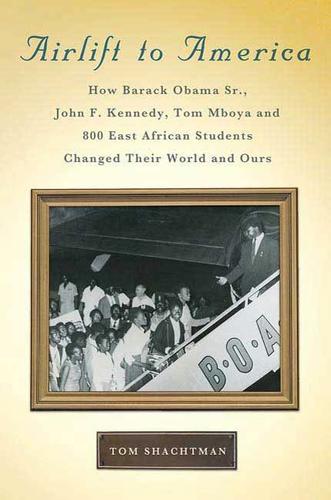 This is the long-hidden saga of how a handful of Americans and East Africans fought the British colonial government, the U.S. State Department, and segregation to transport to, or support at, U.S. and Canadian universities, between 1959 and 1963, nearly 800 young East African men and women who would go on to change their world and ours. The students supported included Barack Obama Sr., future father of a U.S. president, Wangari Maathai, future Nobel Peace Prize laureate, as well as the nation-builders of post-colonial East Africa -- cabinet ministers, ambassadors, university chancellors, clinic and school founders.

The airlift was conceived by the unusual partnership of the charismatic, later-assassinated Kenyan Tom Mboya and William X. Scheinman, a young American entrepreneur, with supporting roles played by Jackie Robinson, Harry Belafonte, Sidney Poitier, and Martin Luther King, Jr. The airlift even had an impact on the 1960 presidential race, as Vice-President Richard Nixon tried to muscle the State Department into funding the project to prevent Senator Jack Kennedy from using his family foundation to do so and reaping the political benefit.

The book is based on the files of the airlift's sponsor, the African American Students Foundation, untouched for almost fifty years.